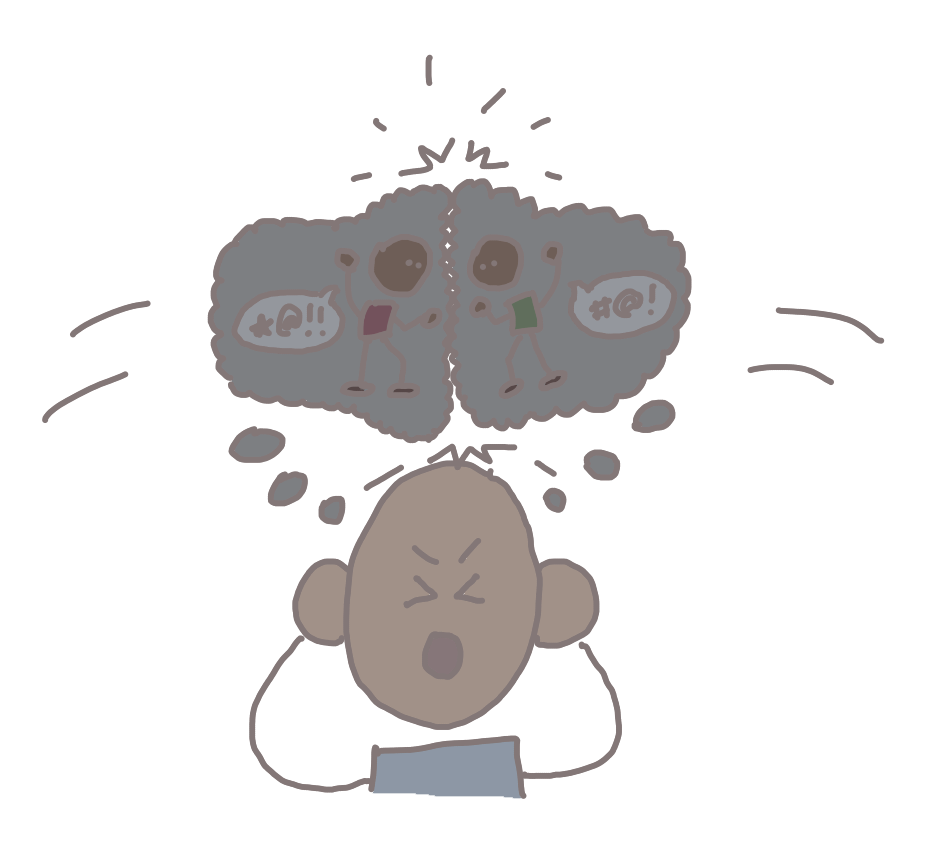 A central tenet of dialectical behavioral therapy became my reality recently; I was able to embrace two apparently contradictory realities.

The first weekend of April was General Conference in the Church of Jesus Christ of Latter-day Saints. It is essentially ten hours of sermons spread over five different two-hour sessions. That has always been a weekend that I have anticipated and enjoyed. It occurs every April and October, and so this was the first conference since I learned that I have OCD. Last October, I was still in the discovery phase, and did not know what I was dealing with.

A big part of my diagnosis is dealing with black-and-white thinking. I struggle to see a spectrum, and view the world through binary glasses. As I mentioned in my coming out story, my family and religious culture growing up fed in to my black-and-thinking, and reinforced my notion of decisions being moral and absolute. I was always following either Satan or the Savior. This is something I have discussed at length with my therapist, who is of my same faith. When I complained to her about the reinforcement that I felt I received, she told me that most people who heard the same thing did not feel the same distress, and instead found it helpful to guide them as they made moral choices. The problem is not the emphasis on righteous choices, but the fact that OCD twists those teachings to mean something different to my mind.

Even with all of that context and preparation, I was taken off-guard with how challenging it was for me to listen to the conference talks. They are addressed to a diverse worldwide audience. I had not realized that I was having a hard time until my sister messaged me Saturday evening and asked how I was doing. When I paused to consider, I found that I was feeling overwhelmed. My sister asked if I was overwhelmed from conference or from normal family chaos. Again, I had to stop to think and found that it was a bit of both. There were a few talks that were especially challenging for me. I left things there that night and did not think about it much.

The next morning, I asked a couple of my kids which talk was their favorite from the previous day. I had a learning moment when my son shared that his favorite talk was precisely the one that I found the most challenging. It was a great reminder to me that most people are not going to hear the same difficult messages that I do, and will instead find hope and encouragement. Before the sessions started up again, I took a few minutes to write in my journal to process my feelings. I wanted to share an epiphany that I had.

I wanted to take a minute and try to shine some light on and reveal exactly what it was that was so hard for me yesterday. The talk that struck me as painful reinforced some of my black and white thinking around right and wrong. It seemed to say to me that I was not doing enough, or well enough, and need to be better. The thing is — that is true. I do need to do better. But I need to allow two seemingly contradictory thoughts to co-exist in my mind. I am good enough, and valuable just as I am today and I need to be and do better. In many ways, President Nelson’s talk about the importance of repentance could have been hard for me but wasn’t. Somehow, I was able to feel both feelings at the same time. I am lovable and loved right now, and I also need to and can improve and become more like Christ.

That dichotomy is from God. Feeling either of those feelings alone without the balancing effect of the other is not what God wants me to feel. That is Fernando, or even Satan himself, wants for me. The more I get to know Fernando, and how his voice sounds and feels, the more easily I will be able to detect his lopsided arguments. It is not that what he says is always untrue — it is just incomplete. God has more for me.

I felt an overwhelming sensation of peace and comfort as I wrote those words. I knew that God did not want me to feel shame and despair, but rather hope and encouragement. I was surprised when a talk was hard for me again later on Sunday. I thought to myself, “I already processed this, and it shouldn’t be hard anymore.” It was a good reminder that this is an ongoing process, and highly uncertain.

I know now that this realization does not guarantee that I will never struggle again. I will continue to see the world in black and white, and will need to pause and confront the distortions. Even more importantly, I need to cultivate the skill of holding two opposite truths and allowing them to co-exist in my mind. Life is messy, and usually non-binary. That is a struggle for me, but I am coming to accept it.

🎉
You subscribed with [email] on [date]. Thanks for joining me!
END_OF_DOCUMENT_TOKEN_TO_BE_REPLACED