In my update this week, I share about more departures at work, writing by hand, and looking forward to a new psychiatrist.

One of the hardest things about work for me is the people. That is definitely the best part as well. But part of the danger with the people at work is that they leave. It’s not like a family where we are connected for life. And while relationships can continue past common employment, the reality is that things change.

As I dealt with then, so I deal now again with a deep sense of loss. The designer on my team, who has been my partner since our product manager left, and a key leader on our team since it formed, is leaving for a new job. Also one of my good friends who was another engineering manager is leaving.

It is important in times like this, I remind myself, to pause and allow myself to feel the pain. Loss is pain. Denying it only makes it worse—the pain becomes suffering. We will always have pain in our lives, but when we honor those emotions and sit with them, we can avoid the damaging effects of suffering.

As I was sharing the departures with my wife, she commented that I seemed to be handling the changes much better than I had with similar situations in the past. It gave us a nice moment to pause and reflect on the progress we have made. As we are moving along, making incremental improvements, it can be hard to have a clear picture on how much I have changed.

I realized that part of the reason I have been able to cope with these fairly monumental changes is that I have been consistently taking time to write lately. And when I say write, I mean with a pen in an actual notebook.

For years, I had turned nearly all of my life to be digital. I read ebooks for the convenience. I journaled in Day One, which I still often do. I carried my phone with me wherever I went and I tried to capture my life digitally as much as possible.

Lately, I have been moving to more analog materials. Some of it started when I took a week as a device fast. I still read some things digitally, but I enjoy reading actual books. And I have started writing by hand again. In some ways, I feel like I have rediscovered my first love.

I wrote a great deal growing up. Almost an indescribably amount. You may even call it obsessive. Go figure.

But I had forgotten just how much I love the feel of pen on paper. The curl of a page freshly filled. The indentations as you turn the page over. The crinkle of a page with both sides covered. The smell of ink flowing across the paper. I truly love it. 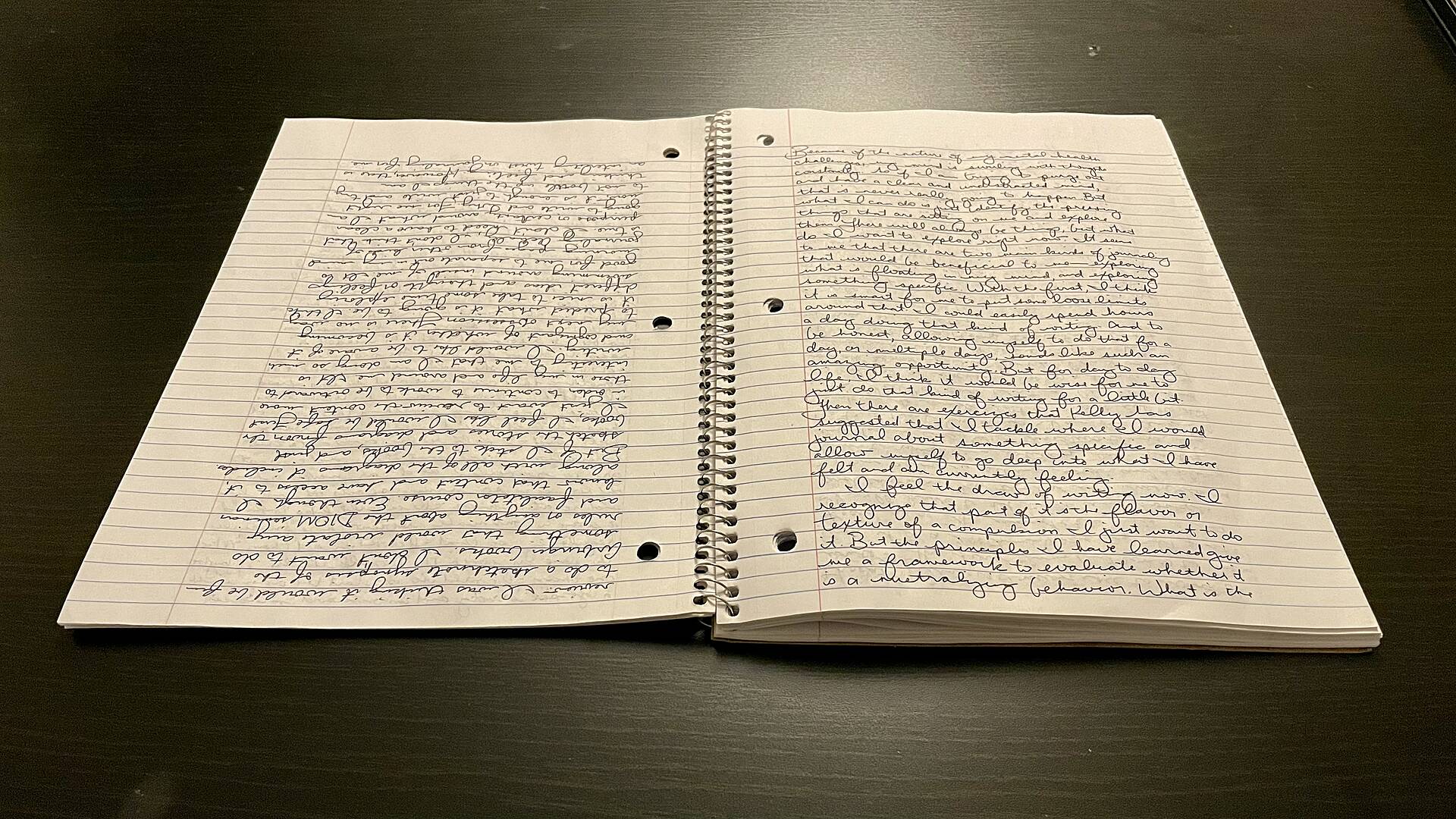 And even better, writing by hand is a powerful exercise to improve your mental health. Part of the magic is actually creating something with your hands and having a sensory experience. Even more valuable is the opportunity to flush out your mind. It often allows you to identify thinking errors. And, as my therapist regularly reminds me, emotion is energy that needs to leave the body. Writing is a fantastic way to release that energy.

This week, I am meeting with a new psychiatrist. After almost two years with my newly former psychiatrist, I decided to find someone who specializes more in OCD and panic disorder. My previous psychiatrist dealt primarily with postpartum depression, although came highly recommended and was much better than the first one I tried.

There is a bit of fear interlaced with hope at the upcoming changes. I don’t know what to expect, which can often be difficult for me.

In preparation for that appointment, I have gone back over the past few months and charted my mood week by week. I just noted whether I was up or down. It was interesting to see the trends. While you may not have a mental health condition you are struggling with, it could be an interesting exercise to see if your own moods fluctuate in any sort of pattern.

Often, when our moods change, we can feel out of control. It feels as if our body is unpredictable and we are slaves to its whims. But when we can see order in the chaos, it combats the feelings of helplessness.

The saying often goes that the only constant is change. I hate sayings like that which seem contradictory. But this week, I have to admit that it is true. Life is a perpetual series of ups and downs, ebbs and flows. I hope that you and I can find, feel, and share compassion through those changes.

🎉
You subscribed with [email] on [date]. Thanks for joining me!
END_OF_DOCUMENT_TOKEN_TO_BE_REPLACED