This week’s story requires a bit of backstory, or at least I want to provide it. In April, my wife and I took a food sensitivity test. We found that we both had a sensitivity to dairy, gluten, eggs, and tree nuts. Starting in May, we went on an elimination diet. Now we are gradually adding them back in to see if we have any reactions.

Over the weekend, I decided to try out dairy. I had already reintroduced gluten without any noticeable side effects. I ate cheese fries for the first time in 8 weeks, and enjoyed a frosted lemonade from Chick-fil-A. I wasn’t sure those would have enough dairy to give me data on my sensitivity to cow’s milk, so I planned to enjoy my first bowl of cereal in a long time the next morning. I got up and prepared some breakfast for the kids and had a painful realization.

We were out of milk.

Now, back when I was having milk, I tried to make sure we had three or four gallons on hand. With nine people, we go through milk pretty fast. But I hadn’t been paying close attention recently. For a few minutes, I was frozen. Plan changes, particularly in the morning, are rough on me. I told my wife that I was struggling, and she had some good ideas. There was a little bit of milk left that I could drink, I could have a yogurt, or there were green smoothies left over that had milk.

I poured out the rest of the milk, and froze again. Instead of the eight ounces she had estimated, there was more like two. I fought as hard as I could to not say anything. I recognized that I wanted to point out how little there was in order to transfer my distress onto her instead of sitting with it myself. I resisted the urge, even as it clamored louder and louder in my mind.

That is often how my obsessions and compulsions look. A thought comes into my mind, along with some action that my brain insists that I take. As I resist taking that action, the urge to do it grows stronger and stronger. Most of my OCD recovery involves sitting in the distress of those urges without performing the compulsion.

In this case, I was successful. I did, however, leave the cup filled with the scant quantity of milk sitting on the counter for a good ten minutes. Part of me hoped that my wife would see it, realize how wrong her estimate was and how little I had available, and provide me some comfort.

Soon after I had done that, I began to be overwhelmed, or perhaps to notice that I was already overwhelmed. I told my wife I needed to retreat for a bit, and that I would start cleaning the basement as we had planned to do together.

A few minutes into cleaning, I sat with back against the wall and just wept. I texted my wife a single crying emoji, knowing that she would come down when she could. As we talked about what I was feeling, I told her,

It was so hard feeling that I couldn’t even handle being out of milk. I am so tired of living with OCD and having to work so hard just to function every day. I told her that I wish I could be a help and not a hindrance to her. She laughed as she said, “And you can only be one on the other. O or 100.”

That broke through some of the overwhelming guilt and shame I was feeling, and I laughed as well.

It is so easy for me to fall into all-or-nothing thinking. Black and white. Success or failure.

At my wife’s suggestion, I came up into the mountains to be in nature, and do something that I enjoy and that calms me. That is where I am writing this now. 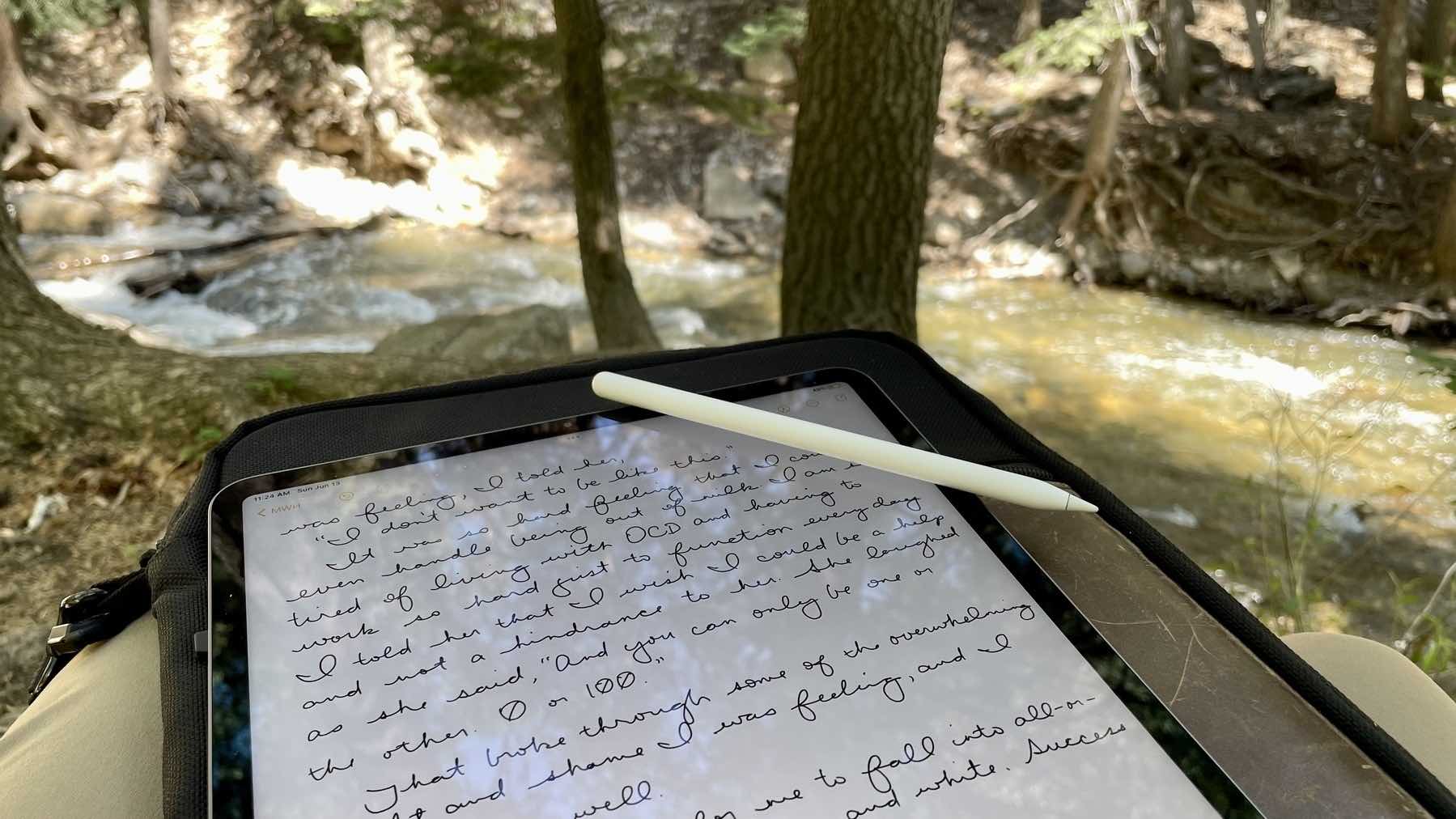 There’s something almost magical about being in nature, especially by water. While I know that I will continue to struggle and have challenges, I also know that I have skills to face them.

When a problem arises that affects us deeply, the issue is rarely that particular problem. In this case for me, it was not the milk that mattered. What threw me off was the change in plans.

The plan change caused enough distress that I was driven to a sense of despair and hopelessness. I felt that my mental health condition was destroying my life. I feet shame and guilt at being a burden. Ultimately, I felt that I was not worthy of love because of my struggles.

This is a lie.

All of us deserve love and compassion and acceptance. We don’t have to earn love, and in truth, we can’t. We are enough just as we are. And at the same time, we can and should always works to improve.

This is one of the great dichotomies of life. We are enough as we are, and we are never done growing

My challenge this week, and yours if you will accept it, is to sit in the distress of not feeling good enough. Inevitably, something will come up that prompts your brain to tell you that you am not enough.

When that happens, just sit in it. Don’t try to achieve your way out of those feeling. Don’t turn to some numbing distraction. Also, don’t allow them to sink you down into despair and hopelessness. That can happen if you start projecting into the future assuming that things will always be this bad.

Instead, take a few deep breaths. Try to identify the emotions and locate them in your body. Approach them with curiosity. See if you can explore the sensations they bring. And then extend yourself some compassion.

🎉
You subscribed with [email] on [date]. Thanks for joining me!
END_OF_DOCUMENT_TOKEN_TO_BE_REPLACED