Big news—I’m taking on new projects! This week, I share the challenges of being flexible, a great moment of connection, and realizing my big news that I’ve already started being a contractor.

As I mentioned the past couple weeks, I have transitioned from working full-time for the education startup Factor to contracting for them. The idea is that it will just be for a few months, so I’m going to try out the full time contracting life. I have done contract work off and on for the past decade, but this will be my first crack at going full time.

I wrote more about how it came about in update #80: Uncertainty training. 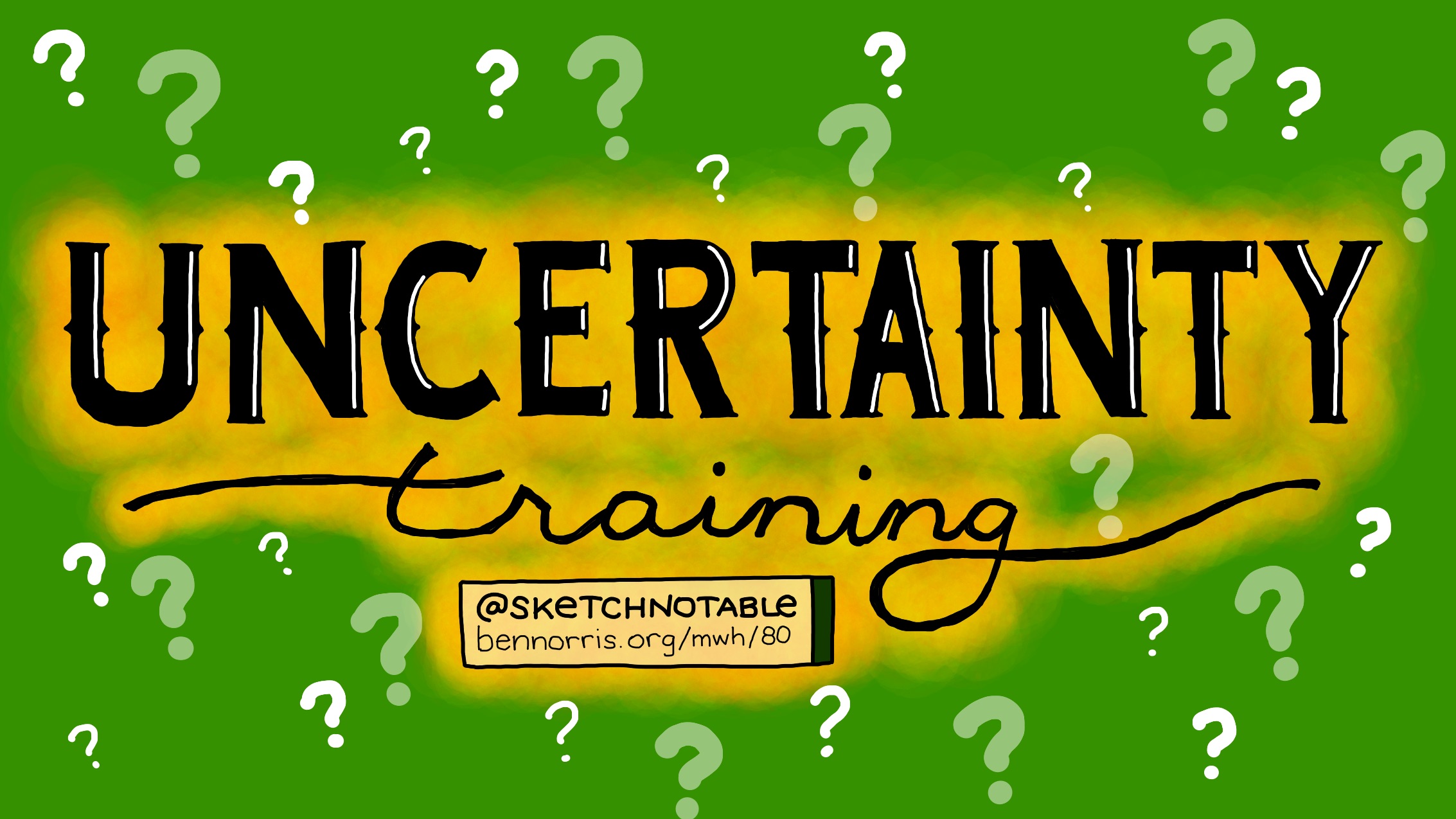 This past week was my first without a full time job, although I spent almost all my time building out something cool for Factor. They are going to run challenges that teens can sign up for and do real projects for real companies with the chance to earn cash prizes. You can learn more on the website.

One thing that came up right away was a challenge to my commitment for flexibility. My past few jobs have been extremely flexible, but there is something even more liberating about working for yourself. The flip side of that is the internal pressure. Every hour that I’m not working is an hour I’m not billing.

I could easily become paralyzed obsessing over my use of time.

Exposure therapy (more accurately called exposure response prevention therapy) is something I have done a great deal for my OCD. It essentially involves forcing my mind to confront situations that seem impossible, but are things that I want to be able to do. By engaging in the exposures, I can train my brain to habituate to the distress. That allows me to choose to do that behavior if I want to.

On Monday, right as I was starting to settle in for my first full day of contracting, my wife called. She was not feeling well, and needed me to come home and take care of our seven kids. For a second, I froze. This wasn’t fair. This wasn’t the plan. This shouldn’t be happening.

So I cancelled the lunch I had planned, and went home and took over. Thankfully, the four youngest went to grandma and grandpa’s house for a sleepover that night, so I just had the three bigs. The next day required more adjustments as she started getting back on her feet, and by Tuesday evening, she was pretty well recovered.

Plan changes are extremely difficult for me. But I was happy with how I was able to handle this one.

One of the benefits of the adjustments I made to my schedule last week was that I got to take my oldest daughter out to lunch on Monday before her class. She is now seventeen, and dealing with all of the difficulties of that age, plus a little extra.

As we got in the car, I said that was happy to talk about anything she would like. I was equally happy to sit in companionable silence. So whatever she felt like doing, I just wanted to have a nice hour together.

The first few minutes were quiet, and then she started asking me questions. We got talking about my therapist and how I found her and how lucky I am because of the perfect fit. I told my daughter that I felt strongly that God had guided us so that I could find that therapist—that was why I think it was important for us to move to Logan.

We were comfortably living in Provo, and likely would have stayed there for a while. But a cousin was moving to California and wanted to rent out their house in Logan, and we decided to move up there. A few months later, they moved back, and we moved down to Sandy and lived with my wife’s parents for a few months. While there, we met some friends. A couple months later, we had moved to Lehi, and I had some severe back pain. Those friends we had made had a cousin who was a chiropractor, and I tried that for the first time.

That summer began the great breakdown of 2018.

I started having panic attacks, but didn’t know what to call them. My first one made me late for a chiropractor appointment, and when I met with him, I asked if he could refer me to a therapist. I had no concept of therapy, but thought that might be what I needed. As it turns out, he did know someone, and referred me to the woman who, after a lame attempt with someone else, became my regular therapist.

It was such a connecting moment to be able to share some of those details with my daughter. She had her own experience during that time, and so hearing my perspective of those events was eye opening for her.

As I have dealt with my mental health challenges, I have found such healing and connection in being able to share them with others. It was particularly special to be able to bond with my girl like that.

I hope that by knowing more about this world of mental health, I can help equip my children with better tools to confront their own challenges.

As I was telling my therapist about the week in my last session, I had a realization. I’ve been thinking about when I will start being independent, and my contracting work will begin. As I mentioned earlier, I spent the week just as I had most previous weeks—building something for Factor. But as I was talking, it hit me that I’ve already started.

Part of what helped me realize that was my therapist commenting on the different conversations and lunches I’ve had with friends. She said, “Wow, you’re just jumping right in and networking up a storm!”

I was struck how often this kind of experience occurs. I have in my mind how something will go, or how I will feel when it happens. I build up expectations of a moment in time that will be significant and notable.

But most of the time, change happens slowly and imperceptibly. Only when looking back are you able to identify that a shift has occurred.

Well, that’s where I’m at now with my business. I’m working on getting the business website polished and ready to share. I want to figure out what some of my processes will be. It’s tempting to feel like I have to get all of that done before I can really start. But I am pushing myself to just move forward and do the work.

I’ve decided that I am going to position myself as a mobile consultant. I realized that I now have years of valuable experience and can really help people with their mobile projects. I will lead with being a mobile engineer, but can also do mobile design and product management. As I tell people about work, I’m getting better at asking them if they know people who need help with mobile projects. That’s not something I’ve had to look for before, so it’s new territory for me.

This is an exciting time. I am so grateful for my growth over the past few years to learn how to sit with uncertainty. That is what is making this time possible for me. I can’t even imagine trying to do this five years ago, before I knew that I have OCD. I don’t know how things are going to go, and that’s just fine with me.

Whatever you are wanting to start doing in your life, but waiting until you have things set up perfectly, I encourage you to just start. More than likely, you already have. It can help to talk with someone who can see an outside perspective and help you see things differently.

We all put so many demands on ourselves. Let’s try to recognize and celebrate our wins as well. We are doing more than we realize.

🎉
You subscribed with [email] on [date]. Thanks for joining me!
END_OF_DOCUMENT_TOKEN_TO_BE_REPLACED