This week, I share the struggles I had at our annual homeschool conference, the joys of teaching a class, and processing it all with my therapist.

This past week, my wife, three oldest kids, and I attended the Latter-Day Saint Home Educators conference. I shared about our experience at the same conference a year ago in update #37: Plan changes. There are essentially two conferences happening at the same time—the adults attend one, and the Youth Conference Team organizes classes, speakers, games, and activities for the youth to run in parallel. My oldest daughter was the co-chair of the youth team, so she was in charge of a lot of it, and my wife helped organize the vendors and make the conference financially feasible. This year, I was asked again to give a class to the youth, and had a great time. Each of the sections of my update this week come from my experience at the conference.

I also took some sketchnotes of some of the keynote talks, which I shared on my website. Here’s one of them: 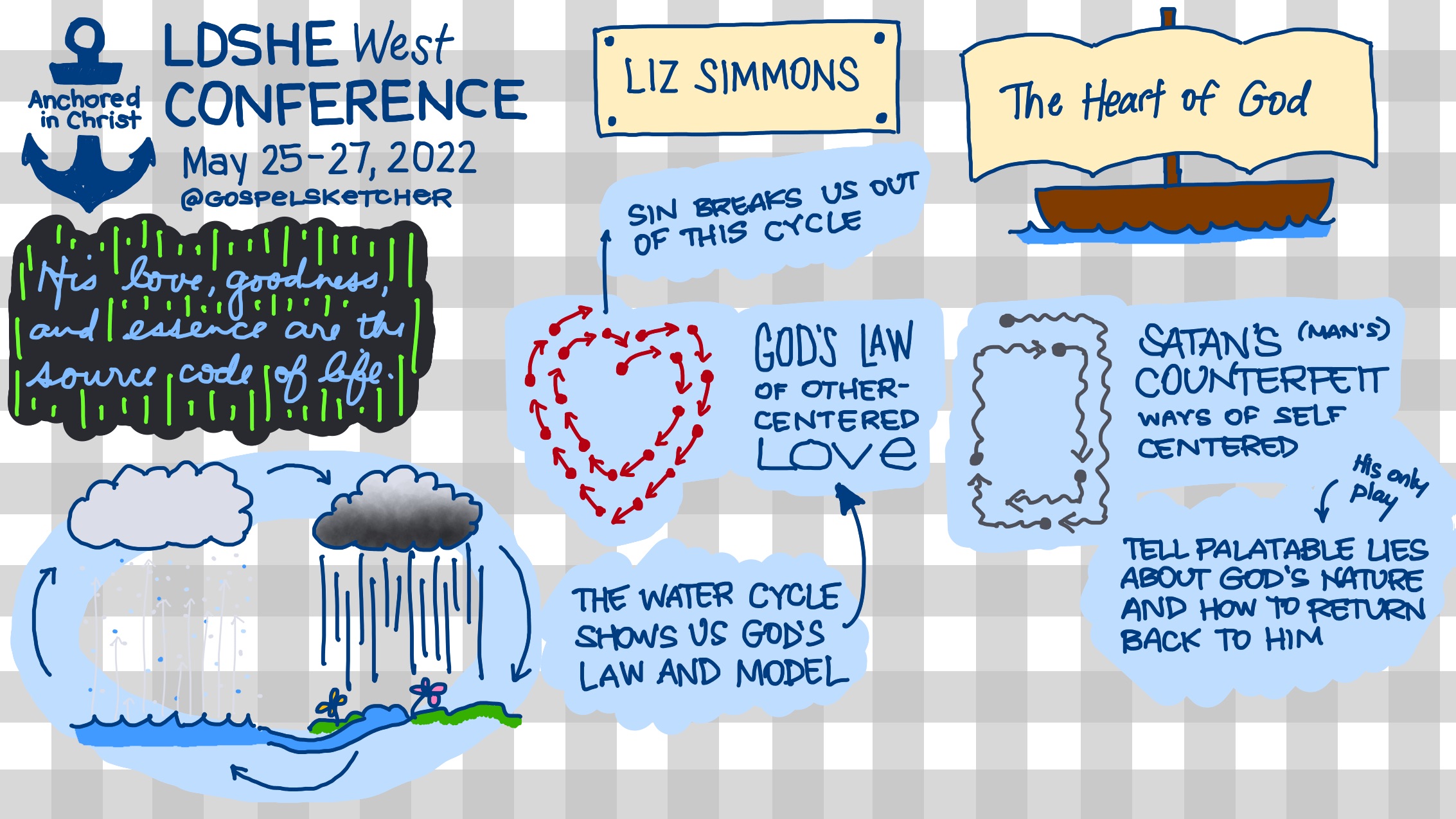 I was taken a little off-guard to discover a day into the conference that I was becoming highly symptomatic. When OCD starts flaring up for me, my symptoms are usually predictable. The first indication is often irritation or rigidity in my thinking. We noticed that little things were starting to throw me—if something was supposed to go one way, but went differently, I had to comment on it, and usually with some annoyance.

As an example, the location of my class caused me some distress. The conference was held at the beautiful Mt. Timpanogos Park, with different classes happening at various pavilions. There was a map in the guidebook provided to people to know where to go. All of the pavilions were labeled on the map, but the one where I was to present had a different name on the map than on the sign at the pavilion itself. All the others matched, but not mine.

I couldn’t let it go.

I groused about it for at least ten minutes to my wife. Part of my concern was that people wouldn’t be able to find it since it was labeled incorrectly. I realized that my class was in the afternoon, and people would have figured out where to go long before that. The distress was just that it was “wrong.”

As the conference went on, my symptoms became more pronounced. The sounds started becoming too much for me. Fortunately, I remembered that I had my new ear plugs with me, which helped a lot. At one point, I decided to head back to our hotel room and take a break for a couple hours and then return. I rested for a bit and got a new high score in Alto’s Odyssey.

One situation surprised me with how difficult it was. As I mentioned in update #80: Uncertainty Training, I was let go from Factor, the educational startup I started working for at the beginning of the year. As a company, we had signed up to be a sponsor for the conference a few months ago. I helped a little bit with the class that we had to explain to people what our company was and how we help teenagers, and we also had a booth for people to come by and ask questions.

Unexpectedly, I found it really difficult to be part of promoting and describing Factor. As I reflected on it later, I realized there was a great deal of pain for me in explaining something that I was no longer part of. I still believe very much in the mission of Factor to help prepare teenagers for life after school, and realized in a much deeper way that I am grieving the loss of this part of my life.

Last year, I taught the youth about sketchnoting. I shared some of that experience in update #37: Plan changes. This year, I was asked to give a class on making comics. I laughed when I got the request, because this is not something that I have any actual experience in. I decided I would call my class “Stick figure comics” and use some of the same principles from sketchnoting, and talk about some of the basics of comics. I drew heavily on Scott McCloud’s excellent books Understanding Comics and Making Comics for that part.

After I started working on preparing the class, I tried pushing myself to draw some comics. An example is from update #57: Impulse control: 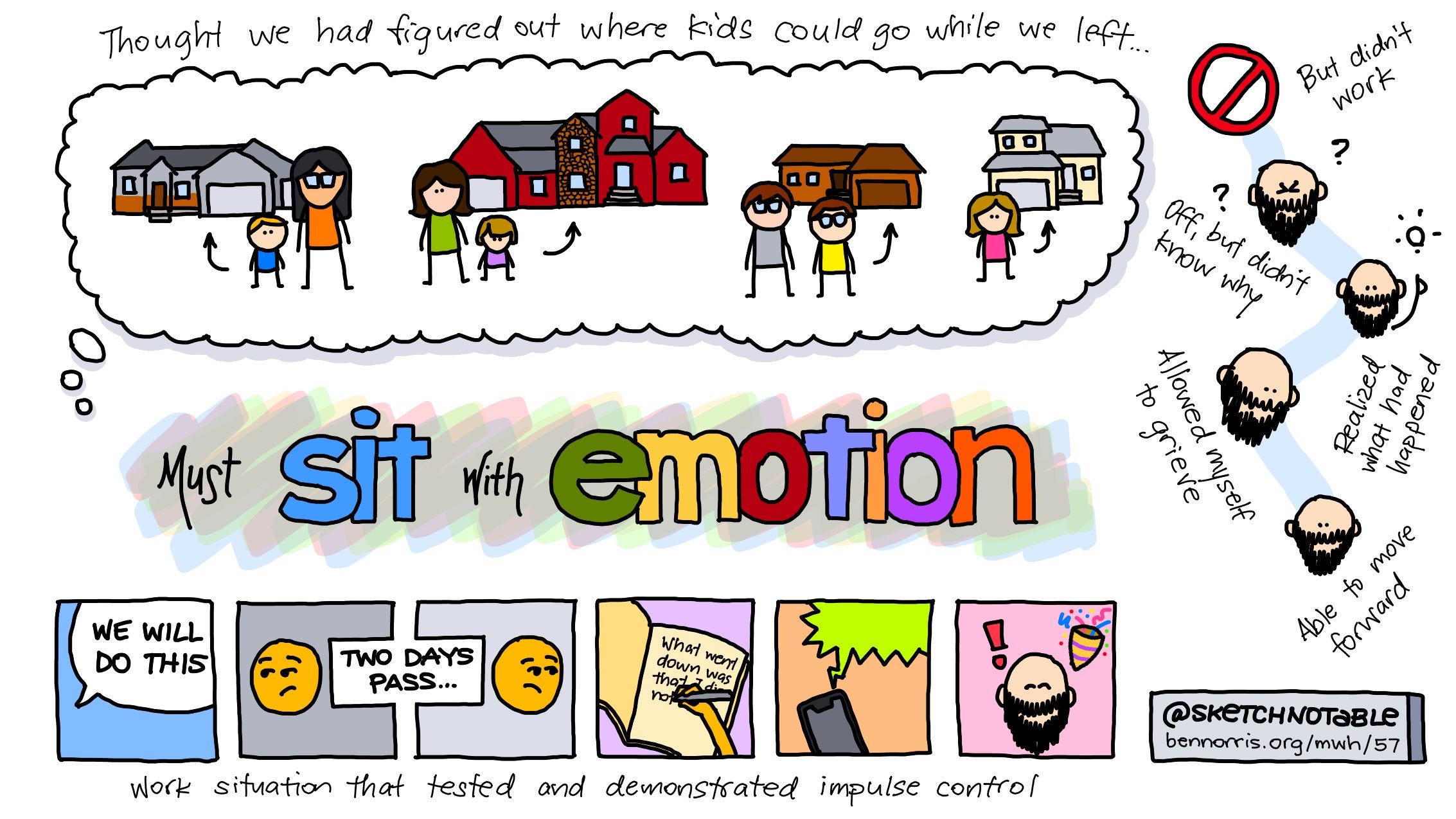 A different kind of example was from writing about my morning activities in update #72: Losing my routine:

The class went really well. One girl, Madison, came up at the beginning and told me that she loved my sketchnoting class last year, and showed me her sketchnotes from the conference so far. After my class was over, she told me, “You’re my favorite art teacher.”

Her comment also made me laugh. I have never thought of myself as an art teacher. I took me many years to accept calling myself an artist. Because my primary form is sketchnoting and stick figures, I feel very much not like an artist. But the truth is that I create art. And now I realize that I teach it as well!

Because of the conference, I was going to miss my regular Friday therapy session. Luckily, my therapist was able to see me on Saturday. I was anxious to talk about the conference and my struggles in order to process why it was so hard for me. As is often the case when I have something I want to talk about, we started with something totally different. She was preparing to teach a class to youth, and asked my opinion on what I would want my daughters to take away from a discussion on experience and pain and suffering.

As a side note, I laugh now looking back at the session. I know that my therapist often pushes me by not talking about what I clearly want to discuss. She has told me that early in my therapy, I would get upset when she would interrupt me or go on a tangent, and I would just wait for her to finish so I could resume what I had been saying. Over time, I would get less and less upset and could handle a meandering conversation with much lower distress.

In last week’s session, part of me was annoyed that we were talking about her class when I was having a hard time and needed to process. But I was practiced enough that I was able to just go with it and enjoy the conversation.

Much of my session was talking about how things are difficult right now, and won’t always be that way. It is important to remember that the kinds of struggles I am having right now are just like emotions—they will pass and change. As I went to leave, I found myself feeling frustrated that I didn’t know what to do now. How was I supposed to handle things?

Then it hit me.

I texted my therapist:

What’s fascinating to me is that I was pondering as I left what to do now. I felt like that was helpful and I can see a future that won’t always feel like this, but I don’t have a clue what to do now.

And then I realized the answer is our conversation at the beginning. Pain is mandatory, suffering is optional. I don’t have to fix everything or do something to improve this right now. It’s just going to take time. Realize that God’s on my side and we’ll get through this.

Exactly what I was thinking as you left—this is an experience for your learning and good. And is a temporary circumstance as you go through the time it takes to get where you want to be. Acceptance!

While your week was probably not dominated by a homeschooling conference, you undoubtedly had your own share of struggles and difficulties. I send you compassion in your journey. And I encourage both of us to remember patience.

When I look back at the times when I have grown the most, they were always painful in the moment. Whether you believe in a God who is shaping your life, and molding you into what He wants you to be, or whether you embrace the stoic philosophy of meeting difficulties as a challenge from the gods, or whether you just look at struggle like weight training resistance, we can find purpose in our pain. As Viktor Frankl said,

Suffering ceases to be suffering at the moment it finds a meaning.

🎉
You subscribed with [email] on [date]. Thanks for joining me!
END_OF_DOCUMENT_TOKEN_TO_BE_REPLACED