This week’s update shares my experience with yet another psychiatrist and noticing my recent increase in OCD symptoms.

About a month ago, I started with a new psychiatrist. For those keeping track at home, this is #4. I wrote about my experience preparing for and then meeting #3 about a year and a half ago.

This new psychiatrist has definitely been my favorite so far. He told me that he is Bulgarian, and I shared that I lived in Romania for two years as a missionary.

“We are the same—Bulgarians and Romanians.”

He would ask me to describe something, and after a couple seconds, he would cut me off, “Ok, I understand.” I loved him.

One of the things that he asked me to do was to start keeping a log each night of how the day was, and to ask my wife to do the same for me. They didn’t need to match. This was the only way to really know how things are going with my OCD.

I actually didn’t do it at all before my second appointment. As I pause to reflect on what was holding me back, I realize that there was some fear that if I start tracking something every day, I will get obsessive about it. But really, this is an opportunity to harness my OCD for good. Since my follow-up appointment, I have been tracking regularly.

He asked me to bring my wife to my second appointment if possible, to get a more realistic sense of how I am doing. She had tracked the past little bit with red, yellow, or green, and he took a look, and said, “Ok. So things are not terrible, but not great. Tell me what is yellow looking like?”

I had to stop and think for a minute to identify how my symptoms have been manifesting. It didn’t occur to me at the time, but now I realize I could have told him about shiny thoughts. 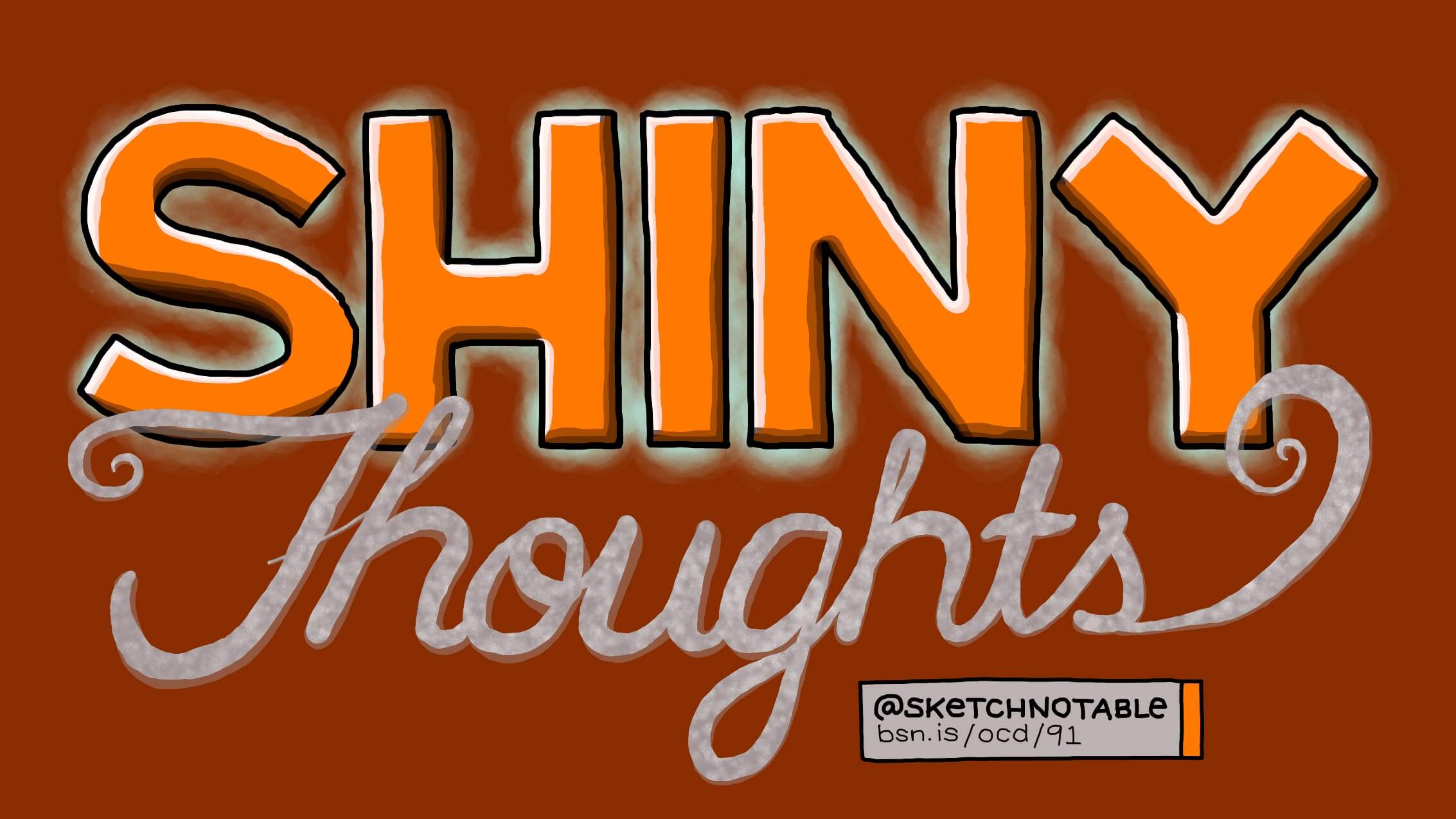 The thing that did occur to me was to describe my difficulty in communicating lately. When I get more symptomatic, I struggle to process nuance or inconsistency.

Also, OCD jokes have been a thing lately.

My wife and I laugh about how my sense of humor is often an indicator of my level of symptoms. OCD jokes are things that I find hilarious, but are actually not funny at all.

I was going to say this thing, but I said this other thing instead! Ha ha ha!

As I’ve thought more about them, I realized they are often dad jokes. But instead of just groaning, they are truly funny to me.

Another perfect example of an OCD joke is the Veggie Tales song, “Monkey.”

The premise is that the characters Bob the Tomato and Larry the Cucumber are “on a photo safari, hot on the trail of a monkey. Or an ape. We don’t know which. Hence the song.”

Fortunately, they have a simple way to tell whether they have found a monkey or an ape.

As they search for their quarry, Larry explains to Bob how they will know what they are seeing.

This classification criteria makes sense and is rational. But Larry takes the rule to a preposterous (perhaps pathological) degree.

Bob: Huh. I think there’s something wrong with your logic, Larry.

Larry: Well Bob, the lady at the zoo said it, and who am I to tell her that she’s wrong? If there’s a tail, it’s a monkey. No tail, ape. It’s easy!

Bob: But Larry, a kite has a tail.

Larry: Then it’s a monkey.

Bob: A comet has a tail.

Larry: Then it’s not a monkey.

Bob: Larry, we might need to talk about this. I don’t think the lady at the zoo meant…

When they finally track down the elusive animal, they are elated:

Larry: I can’t believe it’s true. All this time we’ve looked for you. Snap the picture, take the shot, we’re among the lucky few. We finally did it. Photograph her, we’ve discovered what we’re after, let me look! Is it an ape?

Bob: Larry, this is a disaster.

Just in case you didn’t take the chance to watch the video when I included it above, here is another opportunity.

This song describes OCD so perfectly. Or at least my experience with it. Once my brain has a rule, it latches on rigidly. The rule becomes a lens through which everything is viewed and distorted. It is applied in nonsensical ways that seem to make total sense to me.

When this happens, it can be difficult for me to operate in the real world. I have a hard time understanding what people are saying, or why things are happening. When I am symptomatic, my brain breaks when people say one thing and then do another.

Because I have OCD, I need to be alert to my symptoms. I need to notice when OCD jokes are taking over and getting in the way of relationships and everyday communication.

We all can benefit from getting to know our tendencies to distort reality.

As we become more practiced at noticing the times when our brains lie to us, we can stay in charge. We don’t have to be subservient to the whims of our capricious neurological overlords. We can call out our mental bullshit, and course-correct back on track.

The important thing is to actually make changes when we notice that we are off.

Stop merely laughing at OCD jokes (or your personal equivalent), and notice them for what they are—indicators of deeper symptomatology that could disrupt our happiness. Take steps to recharge and refresh so that your brain can be stretched more easily.

As always, extend yourself compassion when you notice these feelings of distress. Validating and honoring your emotions allows you to fully experience and then release them.

🎉
You subscribed with [email] on [date]. Thanks for joining me!
END_OF_DOCUMENT_TOKEN_TO_BE_REPLACED